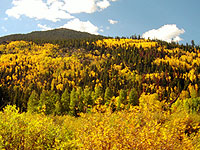 Welcome to the most beautiful mountain village in the United States. Nature will take you on a memorable visual dance of colors and wildlife at its best. The Aspen trees clap for joy as you walk or drive by. The mountain valleys of Rocky National Park open for you to see the splendor of warm colorful days. Watch giant bull Elk bugle and spar for their herds. Stand yards away from nature at its most powerful time.

The crowds of summer give way to the hiking enthusiasts and wildlife watchers. Getting into Rocky Mountain National Park becomes easier. Getting in and around Estes Park shops and restaurants becomes a treasured break from the fast pace of life. The fall is the beginning of Estes Park returning back to its roots of being a small mountain village. If you have never visited Estes Park during the fall, you are missing the magic.

More than 100 booths feature a variety of hand-crafted goods including paintings and drawings, jewelry, metal work, clothing and tapestry bags, gourmet pantry items, home decor, wood carvings, doll clothes and toys, pottery, glass and more. It is a weekend that promises a fun day of unique shopping in Bond Park and throughout the adjacent downtown area.

Held annually the weekend after Labor Day, Estes Park’s Longs Peak Scottish-Irish Highland Festival is the largest gathering of its kind between the Mississippi River and California, and traditionally hosts bands from Great Britain, Scotland, Canada and, of course, the United States.

One of the weekend highlights is the hour-long parade on Elkhorn Avenue, Estes Park’s main street. Bagpipes, drummers, dancers, clans in tartan, Dogs of the British Isles, brass military bands and precision drill teams give a preview of what can be seen on the festival field.

Listen to some foot tapping music and relax with a cold brew and a mustard-smothered bratwurst at the Autumn Gold Festival. This free Sunrise Rotary fundraiser features cold beer, soft drinks, bratwursts, hot dogs and live music from talented local and Front Range bands. The highlight of Autumn Gold is the popular raffle with the winner taking home the grand prize of $5,000.

Each September, elk in Estes Park are regaled, imitated, watched and otherwise celebrated during the community’s annual Elk Fest, timed to coincide with the elk rut – and the natural sight and sound spectacle created during the big game’s mating season. Elk Fest visitors can view elk during the rutting season in the wild on guided tours, as well as learn more about elk, their habitats and how to observe them in the wild. There are bugling competitions (elk bugling is characterized by deep, resonant tones that rise rapidly to a high-pitched squeal before dropping to a series of grunts), a Mountain Man Rendezvous, Native American story telling and music, archery contests, and more. You can enjoy the Elk Fest between 9 a.m. and 5 p.m. both Saturday and Sunday.